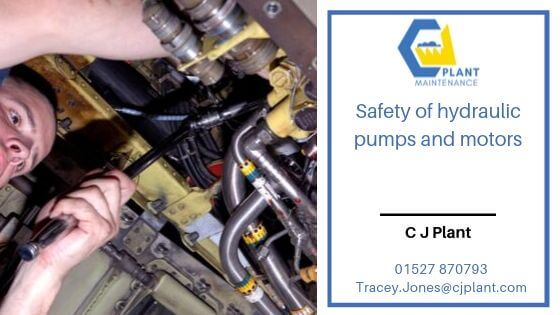 Safety of hydraulic pumps and motors

Hydraulic systems are used in a variety of industrial applications and they come in many different shapes and sizes. They are used so widely because of their power, control accuracy and relative simplicity when compared to electric or other of mechanical drive systems.

Because hydraulic systems utilise high-pressure hydraulic fluid alongside pumps and motors, if something does go wrong, negative consequences can be severe. As a result, hydraulic systems must have a number of safety measures inbuilt in order to function safely. Anyone using a high-power hydraulic system should also be aware of safe operation procedures and what to do in case of an emergency.

Below we’ll run through some of the safety features commonly found in hydraulic systems, in particular hydraulic pumps and motors.

Hydraulic systems as a whole

Hydraulic systems are used in a number of applications, from heavy duty industrial machinery, such as excavators, to more complex systems such as those found in aircraft. All hydraulic systems are comprised of the same main components. Hydraulic pumps and motors are the components responsible for transferring power throughout the system. The hydraulic fluid itself is the medium through which power is transferred and pipes and chambers are used to channel the fluid to functional areas.

Hydraulic pumps are the components which take kinetic energy and turn it into hydraulic pressure within a system. As such, they function at the input side of the system, taking energy from an outside source, usually an electric or internal combustion engine, and transfer it as pressure within the hydraulic system.

There are a number of different types of hydraulic pump, the most common utilise interlocking gears to pump hydraulic fluid through the system. Alongside their simplicity, one of the main advantages of gear pumps is their tendency to wear down gradually over time. This means that gear pumps generally don’t fail in the same catastrophic manner as other pump types.

For applications which require very high-pressure hydraulic loads, other pumps, such as rotary vane pumps, are used. Although they are able to withstand higher pressures, failure can be more explosive when it does occur.

As hydraulic pumps function at the input side of the hydraulic system, they are less susceptible to the effects of the load at the output side of the system. This could be the weight of the load being held on the forks of a forklift truck or the resistance of the ground being worked by an excavator.

Unlike hydraulic pumps, most hydraulic motors cannot be back-driven. Hydraulic motors are also susceptible to movement after system pressure and power has been turned off. This is because they usually have a drain reservoir attached to them. If system power is lost, either through a fault or power being turned off, movement of key load bearing components can be a serious safety hazard.

To combat this additional risk, key hydraulic motors have integrated braking systems to stop unwanted movement. Hydraulic pumps are less susceptible to movement because they are attached directly to the primary drive components, i.e. electric motors.