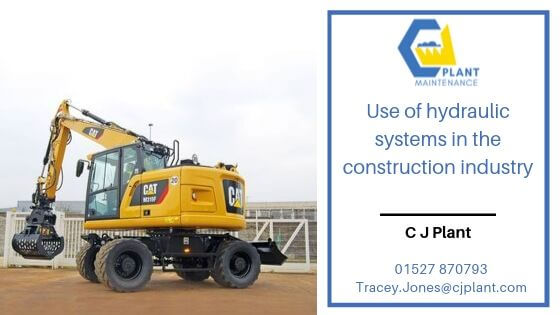 Use of hydraulic systems in the construction industry

Hydraulic systems are rarely ever used on their own. They usually require electrical and mechanical systems to work as a single operational piece of construction machinery. Electrical systems usually operate in a control capacity, while mechanical systems, such as internal combustion engines, are used to provide sources of movement.

Hydraulic systems are widely used in construction machinery for a number of reasons. Below we’ll run through the main attributes which make hydraulic systems so useful and give some examples of machinery which uses them.

Why are hydraulic systems so widespread in the construction industry?

Hydraulic systems have a number of practical attributes which make them ideal for use in the construction industry. Hydraulic systems use specialised hydraulic fluid which cannot be compressed. This makes it the perfect medium through which to transfer power or pressure within a system. Fluid can also be channelled through pipes, hoses and cavities of any shape, meaning that hydraulic systems can easily and effectively be installed on many different types of machinery.

Where fluid is practically incompressible, air can be compressed to very high pressures because it is much less dense. This means that the amount of energy stored within compressed gas is much higher than the amount of energy stored within compressed hydraulic fluid. If a pneumatic system suffers a rupture or is damaged in some way, air can immediately be released at very high pressure, causing serious injury or even death to nearby workers.

By comparison, hydraulic systems are able to handle much higher pressures, making them much more suitable for heavy duty applications. Pneumatic systems are perfectly viable for use in lighter applications, for example air brakes found on lorries and buses. Unlike a pneumatic power system, if a hydraulic system develops a leak or a crack in a hose, it only takes a very small amount of hydraulic fluid to leave the system before the effective pressure within it decreases enough to put the system out of action.

Examples of hydraulic systems used in the construction industry

The construction industry makes use of many different types of hydraulic system, some much larger than others. The most common form of hydraulic system you are likely to encounter on a work site is one that is attached to a moving vehicle of some kind. These include excavators, bulldozers, tipping-bed lorries and various other work vehicles.

Just like any other mechanical or electric system, hydraulic systems vary widely in size, complexity and power capacity. Machines like excavators often need very powerful hydraulic systems in order to dig and move large amounts of earth. At the same time, they also need a complex but precisely controllable network of different hydraulic systems to give operators accurate control of the excavation arm. As such, excavators probably have the most complex hydraulic systems of any piece of machinery commonly used on a construction site.

Hydraulic systems in comparison to other systems

Using the example of an excavator, we can compare the advantages of a hydraulic system in comparison to what would theoretically happen in an excavator which used solely mechanical or electric components.

Because hydraulic systems used hydraulic fluid to transfer power to moving parts, there is less of a need to use mechanical connections, such as gears or drive shafts. Because machines like excavators deal with very heavy loads and also need to be able to exert a lot of force to do their job, an excavator with solely mechanical components would come under intense stress.

Additionally, an excavator with a mechanically controlled arm would need many more individual components to function in the same way as a hydraulic excavator. Each individual section of the arm would either need its own individual electric motor to provide movement, or it would need a complex drive system involving chains, gears or pullies. This would be highly impractical and much more prone to breaking than a hydraulic system.

In much the same way a hydraulic system could not provide an effective means of movement for a vehicle, mechanical components are not fit for use in many of the applications where hydraulic systems are commonplace.

Hopefully our explanation of hydraulic systems has given you a clearer idea of their strengths and weaknesses. If you would like to know more, please get in touch today.